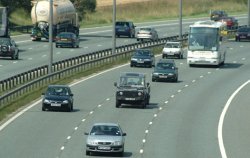 These message may or may not be received and understood. If you want to know if a message was received and understood you must send the process a message and wait for a reply.
Pairs of processes can be linked together. If one processes in a linked pair dies the other process in the pair will be sent a message containing the reason why the first process died.
This simple model of programming is part of a model I call Concurrency Oriented Programming. You can read more about this here.
Posted by Joe Armstrong at 12:14 AM 21 comments:

Last Friday I had lunch with Jane Walerud.

Jane is one of the unsung heroines of the Erlang story. She was the first entrepreneur to recognise that having a better programming technology gave commercial advantages that could be turned into money.
Jane was the first entrepreneur to recognise the commercial value of Erlang and form a new company that would eventually earn over USD 100 million from Erlang.
In 1998, in those heady days before the great IT crash, we formed Bluetail. Bluetail had a strong technical core, composed of the techies who had made Erlang, and Jane. Jane knew all sorts of things like how to start a company, how to raise venture capital, how to write a contract, how to sell software. Things that we knew nothing about.
We knew how to do do techie things like how to write compilers, make databases, make fault-tolerant systems - but not how to turn these ideas into money.
In 2000 we sold Bluetail to Alteon Web Systems for USD 152 million. You can read more about this here.
Since Bluetail, Jane has been involved with eight new companies but she is still looking for ways to exploit Erlang.
Every year we hold the annual "Erlang conference" - people come from all over the world to talk about Erlang. Jane always comes.
"It's a funny thing," Jane said,

"at last year's user conference there were two entrepreneurs - that's a doubling - I used to be all alone."
Posted by Joe Armstrong at 6:39 AM 6 comments: