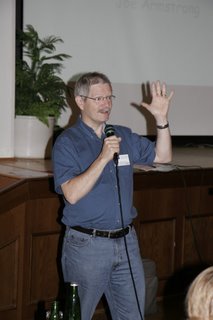 Here I am evangelising on the right.

Last Thursday I gave an invited talk on Erlang at the European Smalltalk Users Group meeting in Prague. This was a chance to meet hard-core members of the Smalltalk community.
Now I must admit I rather like Smalltalk - it's one of those language that just feels right. I like the fact that the core language is small and easy to learn and the set of concepts concerned is consistent and applied in a regular manner. Grokking the libraries, however, is a completely different manner.
For most of the Smalltalk users, Erlang is a language that is just beginning to come in on the radar, so it was kind of fun to go back to basics and explain the central concepts of Concurrency Oriented Programming.
Anybody who is interested in my talk can read Smalltalk Tidbits, Industry Rants This is Erlang as filtered through the brain of a Smalltalk user and actually it's a pretty good summary of the talk.
Posted by Joe Armstrong at 6:57 AM